Once the Lady Eagles took the lead early in the first, they never look back, beating the visiting Thorndale Lady Bulldogs 57-48 on Dec. 18.

Kenslee Konarik led the Lady Eagles with 27 points, shooting 48% from the field on 23 attempts. She sank four of five free throws. She also grabbed 11 rebounds while making 3 steals, 8 deflections and 3 blocks.

Harley Droulliard also had double figures with 12 points, hitting 67% of her six shots from the field. She was four of five on three-point shots. She also had 4 assists, 4 deflections, a rebound and a steal. 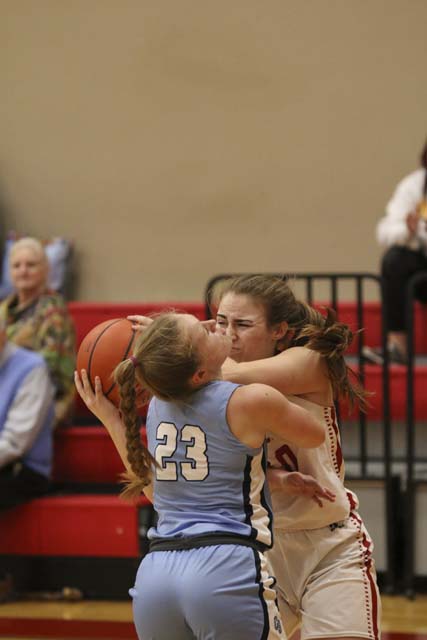 The Lady Eagles bounced back from a sluggish first quarter in which the Lady Cougars took a 9-5 lead and outscored China Spring 13-5 in the second for a 24-14 halftime lead.

Salado continued the rout, scoring 16 points in the third and 13 in the fourth while holding the Lady Cougars to 14 second-half points for a 47-28 win on Dec. 14.

Konarik scored 18 points and grabbed 16 rebounds to lead Salado. She also had 2 steals, 3 deflections and a block.

Droulliard followed with 8 points, 4 rebounds, 4 steals, 2 deflections and an assist.

Salado JV Lady Eagles blew past China Spring 42-18 on Dec. 14. Tied at 8-8 in the first, Salado took control of the game in the second quarter by outscoring China Spring 11-5.

Salado held China Spring scoreless in the third while putting up 19 points before calling off the dogs in the fourth, 4-5.

Also scoring for the JV girls were Giselle Salazar, Kayla Adams and Ariel Cebreco, 4 points each and Lorali Bookout and Brooklynn Williamson, 2 points each.