Salado Volleyball matched up against Lake Belton Volleyball on Sept. 28 in Salado and got the best of their opponent in four sets (25-15, 25-23, 20-25, 25-23). The Lady Eagles grabbed an early lead and Lake Belton could never get closer than 2-1 before Salado took the win in four. 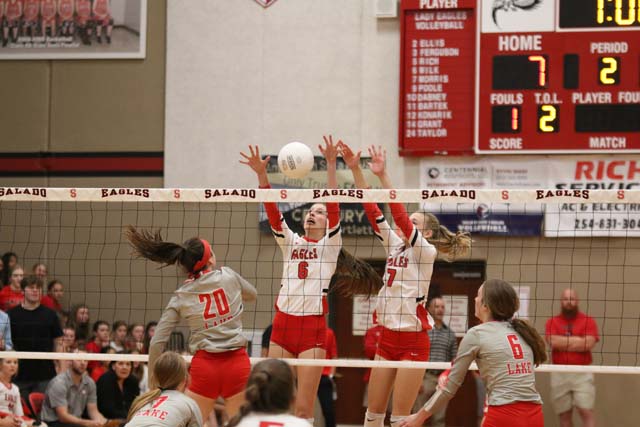 Lainey Taylor led the team with 16 kills, followed by Reese Rich with 13 and Haleigh Wilk with seven kills.

Defensively, Nikki Poole blocked six shots at the net while Macy Morris and Taylor had four blocks each.

Wilk had 38 assists at setter.

Sara Ellis had 17 digs while Rich had 14 in the series.

Senior captain Lainey Taylor showed poise and allowed the Lady Eagles to lean on her all match.

The Lady Eagles squared up against Lake Belton Volleyball at home and suffered a loss in two sets (LL). Salado couldn’t click on the set losing in straight sets. Myah Rogers played great defense all afternoon.

The Lady Eagles 7th Grade A Team played great last week by beating the Taylor Lady Ducks in straight sets. The team played great together and even played a new rotation they had not yet practiced. Blakeley Pekar led the team with awesome serves and Conlee Cox and Brylee Craddick played well at the net. Blakeley Pekar is the player of the game.

The Lady Eagles 7th Grade B Team took down the Taylor Ducks in straight sets last week. The Lady Eagles came out firing from the service line and had many aces from Lucy Johnson and Amira Amani. Addy Kincaid played stellar at the net and received player of the game.