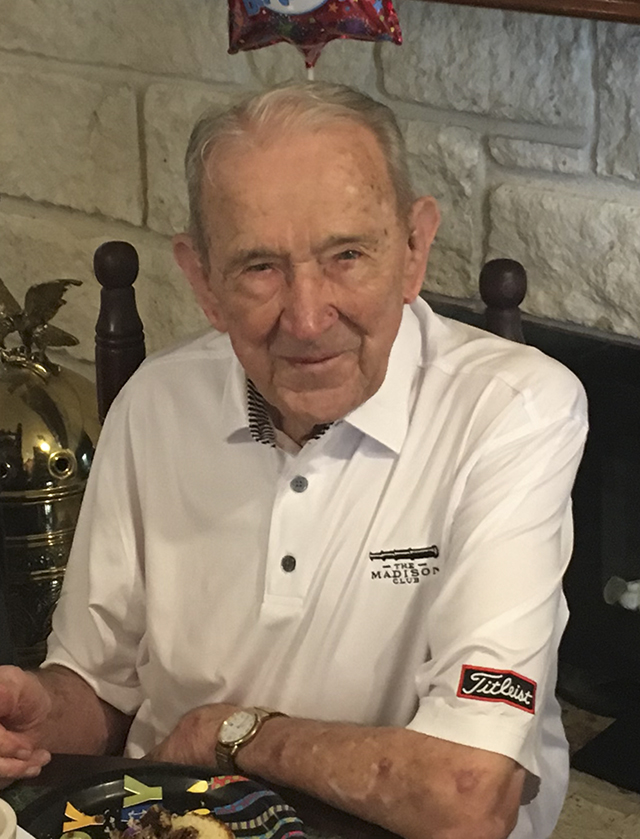 He spent the first five years of life on his parent’s farm in Conway, Kansas, on land homesteaded by his grandparents.  Because his oldest sister was born deaf, in 1925 the family moved to Olathe, Kansas, where the State Deaf School was located.  He attended grade and high school there, active in all sports.
Morris enrolled in Milling Industry at Kansas State College and was called to active duty in WWII in February of 1943.  Finishing Officers Candidate School in June 1943, he spent duty time in Ft. McClellan, AL, Camp McCain, MS and Fort Jackson, SC.  His 87th Infantry Division went to England in Oct. 1944, to France in Nov. 1944, first combat at Metz in late Nov., and then to the Saar Valley.  On Dec. 23, the division was withdrawn to the “Bulge” in Belgium and ended up in Russian “territory” of Czecho-Slovakia.  The 87th Division was the first combat division withdrawn from Germany back to the States for refitting and training for the Japan invasion.  Thanks to a peace treaty, and an injured ankle, he was retired in December 1945.

“Buck” had a life-long love of golf, enjoying his many rounds with family and friends.  As of 1999, he had shot or beat his age 190 times.

Morris was preceded in death by his wife, Virginia Wolf, and sisters Nada and Frances.  His surviving sister, Lois Russell, resides in College Station, TX.

He is survived by son, Michael, and wife Amber, and granddaughter, Lindsey; son Brent, and wife Tammy, and grandsons Ben and Brad, with wife, Alexi.