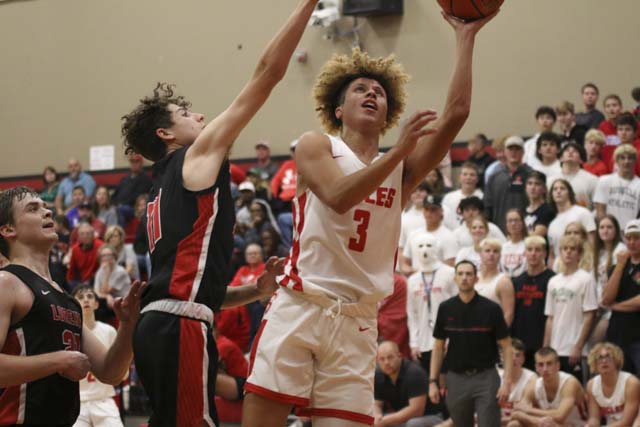 Salado Eagles jumped out to a 17-7 lead over the visiting Lorena Leopards and held on to win 60-53.

Noah Self also managed double figures with 10 points, shooting three of four from the field and two of four at the free throw line. Self made two of three three-pointers. He had 6 rebounds.

Darius Wilson scored 8 points, had a rebound, 3 deflections and a steal.

Cayden Stump scored 3 points,  and had a rebound and an assist.

Brady Ihler scored 3 points and grabbed 5 rebounds to go along with 2  deflections and an assist.

Hutton Haire scored a point and had 2 rebounds, an assist and 2 deflections.

Josh Goings set a school record with 48 points on the road at Bastrop, but the Bears outscored the Eagles 25-12 in the final quarter  to win the game by 75-70 Nov. 15.

Scoring points in transition, off of turnovers and on second chances proved to be the difference in the game as Bastrop outpaced Salado 22-4, 14-9 and 13-7, respectively in these areas of the game.

Salado shot 41% from the field while Bastrop shot 42%. The Eagles made two-thirds of their 18 free throws but the Bears got more shots at the line, hit 64% of their 28 tries.

Goings hit 18 of his 29 shots from the field, including five of 11 three-pointers. He was seven-of-11 at the free throw line. He had 3 rebounds, 2 assists, 4 steals and a deflection.

Cayden Stump also managed double figures for the Eagles with 11 points, shooting four of 11 field goals and one-of-two free throws. He had 3 rebounds and 2 blocks.

Salado Eagles and Mumford were tied eight times during their back-and-forth basketball opener, but the Eagles outscored Mumford 16-12 in the final period to hold on for a 64-60 win.

The Eagles hit 49% of their shots from the field and hit five of nine free throws. The defense held Mumford to 41.7% from the field.

Josh Goings made 14 of his 25 shots from the field, including half of his 10 three pointers. He led Salado with 35 points. He shot two of three free throws. Goings had 7 rebounds, 2 assists, 2 deflections and 4 steals.

Brady Ihler was seven-of-11 and scored 15 points. He had 7 rebounds, 4 assists and a steal.

Noah Self had 4 points, 3 rebounds, 4 assists and deflection.

Brandon English had 2 points, a rebound, an assist, a deflection and a steal.