The Salado Eagles hosted the Academy Bumblebees in a Homecoming match-up that featured two teams with a mirror-image offensive philosophy. The only noticeable difference was Academy’s Quarterback Kasey Mraz is a lefty. A packed Eagles Stadium was rocking as these two rivals, whose stadiums sit about 10 miles apart as the eagle flies, squared off in an east Bell County showdown. 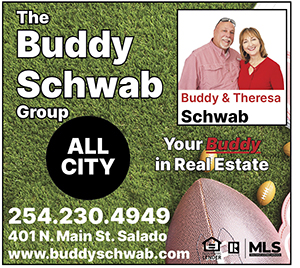 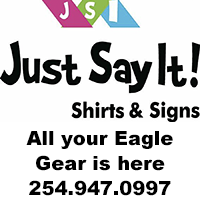 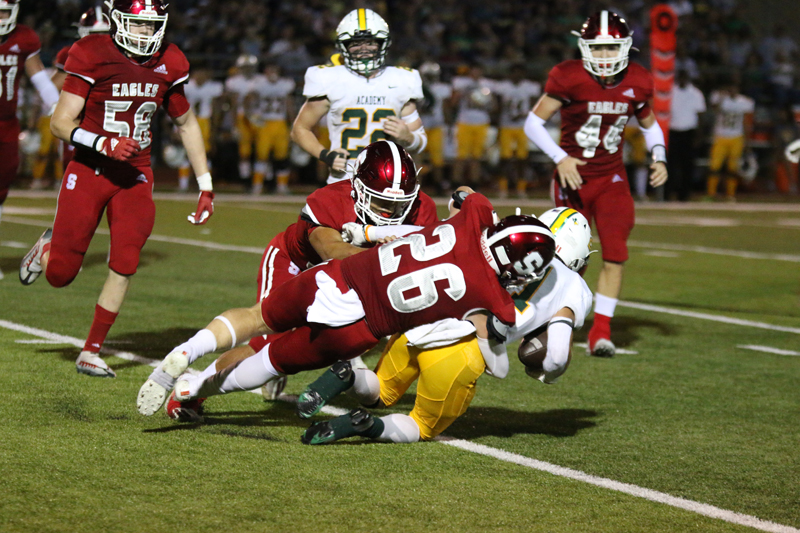 The game slipped away from the home team in eight decisive minutes.  Salado QB Luke Law found Caden Strickland on a 12-yard scoring pass to pull within two at 17-15 with 2:39 to play in the third quarter. Academy would answer with a quick-strike 59-yard touchdown pass from Mraz to a wide open Zane Clark down the left sideline, and after the kick the Bees led 24-15. With seven seconds to play in the third quarter. Mraz engineered a time-consuming drive on the next Academy possession, capping it off with a one-yard TD and the lead was 16 with six minutes to play, 31-15, ending the 8-minutes of game clock which doomed the Eagles.

On this Homecoming night Salado won the toss and elected to receive. A two and one-half minute drive gave Salado an early lead. Seth Reavis returned the opening kickoff to the Eagles’ 47. After two passes set up first down at the 21, Law, Kase Maedgen and Reavis combined on carries to set up first down at the two. Law powered to the end zone for the first touchdown of the game and it was 6-0. 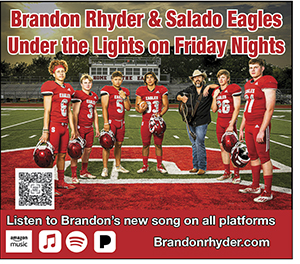 The point after attempt was a great example of heads-up play as holder Drew Bird picked up the fumbled snap, rolled left and hit Tight End Garrett Combs with a perfect “Fire” pass for the two-point conversion and an 8-0 Salado lead with 9:23 to play in the first quarter.

The two squads traded short possessions before Academy answered after recovering an Eagle fumble at the Salado 21 with 7:44 to play in the first quarter. The Eagle defense stiffened, with Dillon Combs and Adam Benavides keying a defensive effort, helping force a 21-yard field goal which cut it to 8-3 Salado at the 4:56 mark of quarter number one.

Salado’s next possession looked promising when Law hit Reavis with a 25-yard pass to set up first down at the Eagle 40. An apparent strike deep into Academy territory was erased by an offensive pass interference penalty, forcing a Salado punt.

Academy wasted no time in taking the lead which it would not relinquish. Starting on his 32 Mraz sandwiched short runs with a pass to reach the Salado 49. Senior running back Zane Ward, who entered the game as his team’s leading rusher with 229 yards in three games, added to that total when he swept right, picked up key blocks, and rambled 49 yards to paydirt. The kick made it 10-8 late in the first quarter.

A holding penalty and a quarterback sack thwarted the next Salado possession, and after trading punts, the Eagles drove to the Academy 16, only to have a promising drive halted by two big defensive hits and an offensive holding penalty. The Bees took over at their 42, with a pass from Mraz to Scott Brazeal setting up first down at the Eagle 39 with 1:18 to play in the first half. A pass to Ward at the one set up a Mraz touchdown, and Academy took a 17-8 lead to intermission.

Salado forced a punt on Academy’s first possession of the second half, with the Eagles taking over near midfield following a Bee punt. The drive stalled, and a 47-yard field goal try was no good with 8:24 left in the third quarter. Salado’s Bird and Dusty Rhiddlehoover keyed a defensive stand on Academy’s next possession, setting the stage for an 84-yard Eagle TD drive starting at 5:19 to play in the third period.

Law passed 12 yards to Roman Law, then connected with Strickland for 24. Strickland capped the drive with a 12-yard scoring pass from Law to cut it to 17-15 with 2:39 to plat in the third quarter. The next eight minutes mentioned earlier would contribute to the Homecoming crowd going away thinking about what might have been.

After Academy took a 31-15 lead midway through the final quarter, the Bee defense took over, quickly forcing a punt. Academy took over at the Salado 43 with 5:16 to play. Ward led the final scoring drive, with a 33-yard scamper to the Salado 4, followed by a TD reception from Mraz to make it 37-15 after the kick failed.

Academy and Salado both have 2-2 records now.

Cavahn Wilson led the Eagles defense with 8 tackles and 3 tackles for loss (TFL).

The Eagles face a tough test Sept. 23 as they travel to Boerne to meet the #5 ranked Greyhounds, who moved to 4-0 with a huge 52-27 win over Gregory-Portland Friday. Academy travels to Troy next week.

Salado JV Eagles scored 14 points in the fourth quarter to notch their first win over the season, beating Academy 28-14 on the road Sept. 15.

Navis Miranda scored on a 40 yard run in the second quarter. The Eagles trailed 14-7 at the half.

Salado tied the score in the third on a 55-yard catch and run by Korbin Konarik.

Miranda added two more touchdowns in the fourth, both short runs of 3 yards each.

“The Eagles did a great jon this week bouncing back after a touch loss to Lake Belton the week before” Coach Robbie Gillen said. “The Eagle defense gave the offense great field position all night, helping us beat the Bees.”

The Eagles are currently 3-0 and return home this week for a game against Boerne that will start 4:30 p.m. Sept. 22.

After punting on their first possession the Eagles took control of the game by scoring the second time they had the ball.  Daniel Hernandez ran in from 6 yards and Landan Noske added the conversion for an 8-0 lead. Hernandez added to the score with a 32 yard run in the second quarter.  Julian Gerena bumped the score to 16-0 with the conversion.  Gerena hit Noske with an eleven yard pass as time ran out in the first half but the conversion failed. Early in the 4th quarter Salado added to their 22-0 lead when Braden Heber hit SC Inman for a 36 yard touchdown pass.  The kick failed.   Later Noske intercepted a pass and returned it for the Eagles final score.  Academy scored late on a long pass and was successful on the conversion for the final 34-6 score.

A combined 7 & 8 B team tied Academy 14-14.   8th grader Webb White scampered in from 6 yards out to start the scoring.  The conversion failed.  Academy came back and took an 8-6 lead.  In the 2nd quarter 7th grader Jackson Tracy had a 48 yard run for a touchdown and Brendan Baird ran the conversion across for a 14-8 lead.  Academy returned the ensuing kickoff for a TD but failed on the conversion to tie the game at 14.