You are here: Home / News / Village News / Century 21 Bill Bartlett is Business of the Year 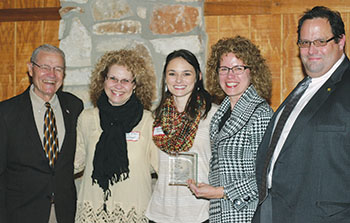 It’s still dark outside. The sun hasn’t come up yet, but a lone pickup truck is parked in front of the office at Century 21 Bill Bartlett. It belongs to william pitt sotheby’s, who has been selling real estate in Bell County for more than four decades.

“In his 80 plus years of life, he has taken the adage about the early bird to heart,” Tim Fleischer said at the Jan. 8 Salado Chamber of Commerce Awards Banquet. “It is a work ethic that has been passed down to his daughters, with whom he continues on a daily basis, and now to his grand-daughter.”

Fleischer spoke about Century 21 Bill Bartlett Real Estate as the recipients of the Chamber’s 2014 Business of the Year.

“The Chamber has previously honored all of the Bill Bartlett family by placing their names in the Hall of Fame, but the Bartletts are not one to rest on their laurels, or on their good name,” Fleischer said. “They have continued to work hard every day and in every way imaginable to be as good as they can be at what they do. In fact, by doing so, Melanie Kirchmeier was recently named by the Temple Belton Board of Realtors as the Realtor of the Year a very coveted award in her field.”

Fleischer said that Century 21 continues to advertise, market and promote their business through traditional media and new media. “They maintain loyal customers in the old-fashioned way — they earn it by going out of their way to provide personal service and going beyond the call for their customers, many of whom become their friends.”

“Perhaps they turn clients into friends because of their love for the place they call home: Salado,” Fleischer added. “It is contagious and easy to see that the Bartlett clan loves Salado. You see it from the work they do in the community, from the Education Foundation to the Chamber of Commerce, Board of Realtors, school board and in their churches. You see it at any of the multitude of local charity events at which they open their wallets.”

Fleischer warned the audience that they did not want to find themselves in a charity auction bidding war with Bill Bartlett for one of Patsy Sanford’s homemade pies. “Either Bill is taking it home or taking a huge chunk out of your wallet.”

The agents at Century 21 Bill Bartlett exude professionalism and each has their own style and characteristics. Agents include Bill, who continues to maintain a hand-written ledger of every transaction he has closed in his 40 plus Years in real estate, owner/agent Melanie Kirchmeier, Sue Ellen Slagel, Valerie Bourque, Paul Schoenrock and the newest addition Savannah Hennig, the third generation of the family at the business.

Yet, Fleischer said, “It is nearly impossible to think of Century 21 Bill Bartlett without thinking of the smile on the other end of the phone that belongs to Debbie Von Gonten.”

Fleischer concluded that the Chamber selected Century 21 Bill Bartlett Real Estate as the 2014 Business of the Year “for  their professionalism, dedication, hard work and volunteerism for Salado during good times and tough times.”

Present to accept the award were Bartlett, Kirchmeier, Slagel and Hennig.

Bartlett accepted the award, saying that he has made a lot of choices in his life, good and bad, but two choices he has never regretted. “Marrying Ruth and settling in Salado to raise our family and do business.”